I’m really pleased to tell you that you can go listen to me in a 55-minute episode of Song of the Soul, a program hosted by Mark Helpsmeet of  Northern Spirit Radio in Wisconsin. I met Mark in April when he came through Bloomsburg with the Friendly Folk Dancers.

In Song of the Soul, Mark talks to musicians about their lives and inspirations and connects that with musical selections the guests have chosen. Since I (sometimes) write short songs, I managed to get 8 songs in there.

The air date was May 29, 2016. In case you’re reading this well after that, here’s a link for that particular episode:

Song of the Soul – Paul Loomis

In case that isn’t enough, there’s even some bonus material that didn’t fit in the 55 minutes.

Thanks to Mark Helpsmeet for giving me the opportunity to do this. It’s nice to be asked questions that make you think a bit. 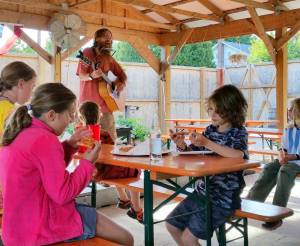 I had a great time Saturday at Canoe & Brew, first kayaking 12 miles down the Susquehanna, then playing an hour of Paul Loomis songs, canal songs, and sea chanteys. I don’t often get to sing the line “one year they got a steamboat all the way to Nescopeck” just hours after navigating around Nescopeck Falls (which were, with the low river level, pretty wild). Spending five hours on the river with your audience also gives a rapport that most shows don’t have. So thanks, everyone!

Guitar not in kayak, disappointing many fellow kayakers.

Lastly, no one ever seems to talk about album sales, so I will. When I made Dry Ridge, my first album, in the summer of 2004, I felt the moment someone who was not a friend or relative bought it, I could consider it a success. I spent $250 on recording and production and $300 or so for 100 discs. A few years later, I ordered 100 more. That CD came out in spring 2005, and in the ten ensuing years, I have sold 99 copies, many to family and friends. But also many to people I don’t (or didn’t yet) know, so it was a success.

I recorded and released Yuspe in 2009, spending more on recording and ordering more CDs. I still have hundreds, but every one I sell is (now) all profit. Yuspe has sold 94 copies in 6 years, even though I gave more away to family and friends.

I spent more time and money (and had lots of help from fellow musicians) on World Famous in Bloomsburg, and have benefited from Jeremy dePrisco’s marketing ideas. So WFIB has sold 96 copies in 10 months, with even more given away – especially to family who bought one or both of the first two.

Which will reach 100 first? I’ve been wondering for months, and didn’t think the three would get this close together. You can affect the outcome, you know…

{Note added October 15: Two days ago someone bought copy #100 of World Famous in Bloomsburg. Adjusting for population, I think that makes it Double Platinum in Bloomsburg.}

This year: More hair, more beard. My promise to you.

Hey folks! There’s a great stretch of gigs ahead: This Saturday (Sep 26), a show so good you have to paddle a canoe (or a kayak) 12 miles to see it! It’ll be about an hour of my usual set of originals mixed in with sea chanteys, canal songs, and other appropriate things that come to me at the time. This is part of the Shickshinny to Berwick edition of Canoe and Brew, a fun group of people paddling the Susquehanna in search of good beer, as the t-shirt says. Go to that website for details. We’ll be arriving at the Berwick Brewing Company sometime in the afternoon – the river is low low low these days. It’ll be great fun.

And then on Friday, October 2, I’ll be playing completely acoustically (that is, electricity-free) at the Antler, right on Main St. in Bloomsburg. This is part of a First Friday event that will have bands in lots of locations around Main St. from 6 to 9.

And then on Saturday, October 10, I’ll be at the Ferry St. Grower’s Market in Danville from 9am to noon. A Saturday morning in the fall is a good time to be out of the house. Come! Listen! Buy some good food too!

Lots of outdoor music this summer. As it should be. More coming for the fall – see the upcoming gigs page, and look for more information on these really soon!

Another good night at the West End open mic – a three-song set with John Huckans on tuba. Have to Pee, from World Famous in Bloomsburg, Lights Went Out, from Dry Ridge, and Devil on the Wild Side, a mix of Walk on the Wild Side and Devil Went Down to Georgia that I crafted about twenty years ago. It sounds much better with the tuba.

The tuba brings in the folks, too, from the other room with cellphone cameras, etc.

And how many people can tell “TUBA SOLO!” in the middle of a bluegrass song about having to leave your tent to go to the bathroom in the rain and have it actually happen? I only know of one, and he’s a happy guy.

Thanks to Darren Inman for the photo.

The expanded Fricknadorable for the debut of “Wolves and Women”

Thursdays at 9pm, the West End Ale House (Haus) has an open mic night, hosted by Darren Inman. Open mic is like a box of chocolates; at West End there are lots of undergrads during the school year, and things quiet down somewhat in the summer. Lately there have been occasional mass showings from the dePrisco musical orbit, with Loomis, Fricknadorable, Negodniki, and Ed Zuber playing in various configurations. Last night was an especially good one. Fricknadorable, Jeremy & Audra’s duo, grew to thrice its normal size with the addition of mandolin, banjo (me), accordion, and snare drum for the debut of the epic 7-minute “Wolves and Women”.

Also, I took a break from World Famous in Bloomsburg material to play three songs from Yuspe.

Lovely time at the Ferry Street Growers Market last Saturday – nice weather, a vibrant market, friendly people, a few CDs sold, and the lovely thing about playing at a farmer’s market: on the way out, a number of vendors saying “hey, you’re the musician, right? How about some [insert one or more: bread/cabbage/potatos/beans/summer squash/cherries]?”

Only one regret: I didn’t get any photos. If you took one, let me know!

(And thanks to Jeremy for loan of the tent. I would’ve gotten all red and crispy without it.)

If you’ve never been to Forks Farm (between Orangeville and Stillwater) you should go sometime. There is good food to be had. Lots of other lovely locally made stuff. And almost always some enjoyable entertainment. Sometimes they let me play too. Once I was upstaged by a pig giving birth in the barn behind me. Every few minutes someone would yell out “there’s another one!” and my entire audience would disappear.

We sing about beans and corn. But mostly corn.

We sings about poles. Poles that are covered in creosote.

(Thanks to Leon Weber for the photos.)

It has been a great spring for shows. Instead of 8,000 words, here are 8 pictures. Thanks to Audra, Anna, and Miranda. 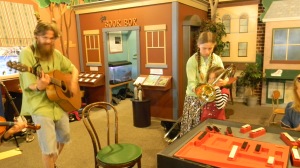 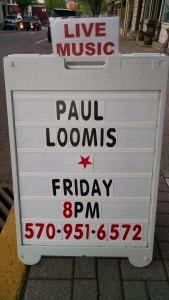 The spring ArtWalk-In show at the Caldwell Consistory gave me a chance to play with Negodniki (Jeremy dePrisco, Mike Hickey, John Huckans, and Safa Saracoglu, who all played on World Famous in Bloomsburg as individuals, not as part of Negodniki…), who were playing after me.

Now the spring has been busy for all of us, and we didn’t have chance to rehearse. But these guys know the songs, and if they don’t, they fake it well. 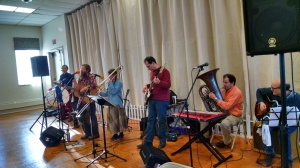 The room was buzzing – it’s where the food was, after all – and it seemed like the louder, livelier songs would hold attention better, so we went after those. 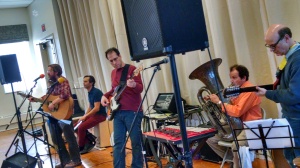 The feeling of playing with 4 others behind you is a little like driving a train. A little like surfing, or riding a bronco. A little like being the puppet president at the head of a junta. With all that momentum behind me, I had a little less control, but the energy makes up for it.

we have to have a little birds picture, no?

So thanks, guys. It is a pleasure. 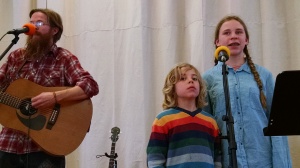 And thanks, Audra, for the pictures. In the next post, we will actually see Audra (Anna took a few photos.) And thanks to the folks who make ArtWalk happen, and those who show up. It was a good day to be in Bloomsburg.