Lost at sea on live TV

Last night was the premier of Our Town Bloomsburg on WVIA. Safa, Randy, and I went up to play Susquehanna (Here It Comes Again) at the end of the show. It was an interesting and overall positive experience , but what stands out for me was about 6 seconds of sheer terror. Let me explain.

Susquehanna is a long song; it goes like this:

In the early days of this song, I’d get confused with Verse 2 (which starts “the settlers used the river like a highway to the woods”) and Verse 3 (which starts “the settlers cut the timber down and floated it to port”), forgetting if I had done both or one or neither. Then for Flood Stories Too we needed a shorter version, so we took out Verse 3 and the chorus. Then I had to relearn to play it with that. For this show, they needed a song 3 to 4 minutes long, so I went back to the Flood Stories edit. 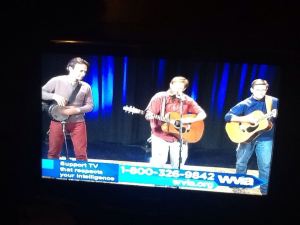 Safa, Paul, Randy on the telly

Playing for the telly was interesting. There are no monitors, no amplification, and so you’re singing into mikes, but you can’t tell what’s being picked up. Coming out of the first chorus, I launched into the next verse, only to realize I didn’t know what it was. What came out of my mouth was “Well…”, which IS how many of my verses start, but not this one. For what felt like a minute (on the tape, it is six seconds) I was totally lost at sea. Still playing the right chords, Randy and Safa still doing their parts, but absolutely clueless as to where I was in the song…”I’m cutting out one of the settlers verses…did I already play one of them? Have I done the next verse? I know I haven’t done the harmonica solo…”

It’s blinding up there.

In the time it took to play G – Em – C – G, it came back, and I launched into “there’s flooding in the winter when the ice chokes up the flow” and all was well again, we all locked in, and I think it picked up from there.

Being on TV makes us more white

After the song WVIA host Lisa Mazzarella asked us a few questions and mentioned the new album (as she had before the song – thanks, Lisa!). I didn’t say anything terribly stupid, which I will count as a victory in my first musical performance on the telly.

All in all it was a fun experience. My thanks to WVIA for doing the Our Town series and for letting us play there, and to Randy and Safa for being the band. And thanks to Lisa Herrald-Doerschler for taking pictures of her TV! 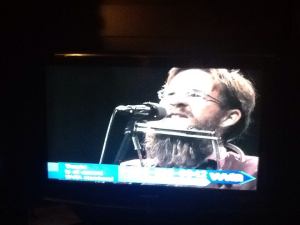 This isn’t our best take ever, but if you’re curious, here’s the audio: