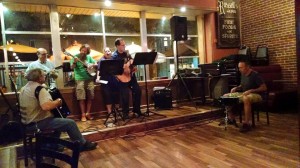 The expanded Fricknadorable for the debut of “Wolves and Women”

Thursdays at 9pm, the West End Ale House (Haus) has an open mic night, hosted by Darren Inman. Open mic is like a box of chocolates; at West End there are lots of undergrads during the school year, and things quiet down somewhat in the summer. Lately there have been occasional mass showings from the dePrisco musical orbit, with Loomis, Fricknadorable, Negodniki, and Ed Zuber playing in various configurations. Last night was an especially good one. Fricknadorable, Jeremy & Audra’s duo, grew to thrice its normal size with the addition of mandolin, banjo (me), accordion, and snare drum for the debut of the epic 7-minute “Wolves and Women”. 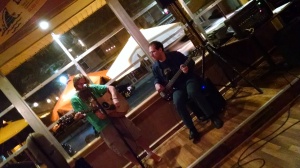 Also, I took a break from World Famous in Bloomsburg material to play three songs from Yuspe.