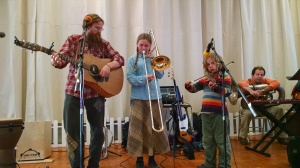 The spring ArtWalk-In show at the Caldwell Consistory gave me a chance to play with Negodniki (Jeremy dePrisco, Mike Hickey, John Huckans, and Safa Saracoglu, who all played on World Famous in Bloomsburg as individuals, not as part of Negodniki…), who were playing after me.

Now the spring has been busy for all of us, and we didn’t have chance to rehearse. But these guys know the songs, and if they don’t, they fake it well.

The room was buzzing – it’s where the food was, after all – and it seemed like the louder, livelier songs would hold attention better, so we went after those.

The feeling of playing with 4 others behind you is a little like driving a train. A little like surfing, or riding a bronco. A little like being the puppet president at the head of a junta. With all that momentum behind me, I had a little less control, but the energy makes up for it.

we have to have a little birds picture, no?

So thanks, guys. It is a pleasure.

And thanks, Audra, for the pictures. In the next post, we will actually see Audra (Anna took a few photos.) And thanks to the folks who make ArtWalk happen, and those who show up. It was a good day to be in Bloomsburg.