After typing this title, I thought about writing something really introspective about time. But that wasn’t the plan, and I’m gonna stick with the plan. About time really meant it’s about time for another post here.

What’s been happening? Well, after all those November/December shows, there was a holiday. The family came for Christmas after Christmas, which meant 14 people for 3 days in our one-bathroom house. But my family is very adaptable, and there were no bathroom emergencies or long shower arguments. 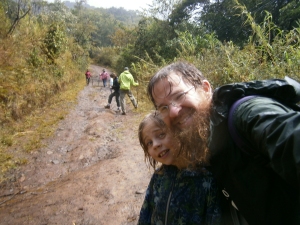 Then we spent two weeks in Costa Rica – an account of that is showing up slowly over at the Waiting for a Bus blog.

Then we jumped back into school and life and I started getting shows on the calendar. The first came last Saturday night at Fog & Flame on Main St. This was during the Destination Blues music festival, this show was a late add, and Leticia, Anna, and Zeke were in upstate New York for the weekend. So it was a truly solo show. The set list, as best as I can remember it (I always have a written list, but I always change things around as the spirit leads).

set break, because we all needed it after the raven

It was an enjoyable show with a friendly and lively crowd, part of which fed me borscht, salad, macaroni, and beer afterword (thank you!)